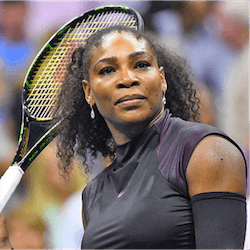 Tennis superstar Serena Williams recently revealed scary details around her pregnancy, saying that she almost died as a result of the many complications she experienced whilst giving birth to her daughter, Alexis Olympia.

Williams recently granted an exclusive interview to news broadcaster CNN, during which she pleaded with the public to offer their support to charitable organisations such as UNICEF. UNICEF provides critical care services to mothers and babies who are not in a financial position to pay their own way.

Williams said despite having received the best medical care available, she ultimately had to undergo an emergency C-section after her daughter’s heart rate dropped dramatically during contractions. The surgery went smoothly, but six days of absolute uncertainly followed after Williams developed a pulmonary embolism shortly after the surgical procedure. The pulmonary embolism caused Williams to experience coughing fits, which eventually led to complications with the C-section wound. Williams reports eventually being returned to the operating theatre, during which time a huge clot of blood was found in her abdomen.

The 23-time Grand Slam champion ended up spending the first six weeks of motherhood in bed.

Williams appeared passionate in her endeavours to motivate those in a position to contribute, to support initiatives like those launched by UNICEF. She revealed that she had become acutely aware of the fact that not all mothers were in the position to afford proper health care and that if her situation had been any different, she may very well have not survived the ordeal.

Williams proclaimed that the time was now to offer support as not enough was being done to support women in need. Williams said that it was time that those who were able to came to the table with support and a plan of action.

The Happiness Of Children Should Be The Focus

Williams’ road with UNICEF officially started in 2006, when she travelled to Ghana for the country’s national health campaign. It was the first time that Williams had had the opportunity to visit Africa and it soon became apparent that she held an enormous passion for the well-being of children. In 2011 the tennis star was appointed as the company’s International Ambassador of Goodwill.  Williams was selected for the role due to her generous charitable endeavours away from the tennis court.

Williams is very outspoken about her passion for children, saying that all children deserved the chance to make something of their lives and that they should be assisted in doing so as far as possible.