Serena Williams Moves Into Second Round 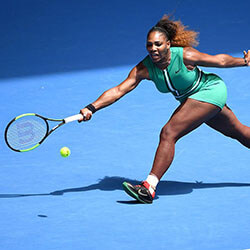 American Serena Williams has made it through to the second round of the Australian Open as she campaigns to earn her 24th Grand Slam title by beating Tatjana Maria.

The 27 year old American, who’s 23rd title came in Melbourne two years ago before she fell pregnant, won 6-0 6-2 within 49 minutes while playing on the Rod Laver Arena.  William currently holds the record for the most Open Era singles titles, but is also looking to match Margaret Court’s world record of 24.

Talking about her time at the Australian Open, Williams told reporters that she has many fond memories of the last time she had played at the tournament, and that it was the best win of her career so far, and she’s happy to be back. She added that the last time she was there she was playing while pregnant, and that it felt weird to be walking back on to the court by herself this time.

Williams, who is 16th seeded, too the first set within 18 minutes against German Maria, and managed to fire 22 winners before the opening match. The seven-time Australian Open victor is set to take on Canadian Eugenie Bouchard next, and will continue to wear compression stockings as she believes the danger of deep vein thrombosis is still a real problem.

The player has experienced severe blood clots in recent months following the birth of her daughter, and will need to be monitored for her entire career.