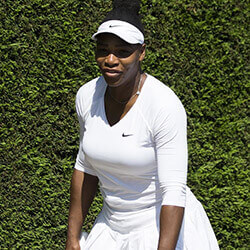 Amid the 2018 Wimbledon games, world-renown player Serena Williams has been seeded 25th for the women’s singles, even though the player is currently outside the world’s top 32.

Williams, who has won Wimbledon seven times in the past, is ranked at 183 in the world. Her rank is mostly due to the long absence she took from the professional scene after giving birth to her first child last year in September.

The Wimbledon official website explains that their seeding follows the WTA top-32 ranking list, except for cases where a change may be necessary due to the decisions of the committee, who can make changes in order to address balancing problems in the roster. The men’s seeding, on the other hand, is based on the top 32 players that are in the ATP ranking list, which is then rearranged on a different system.

The seeding that Williams has received means that Dominika Cibulkova, from Slovakia, and the actual world number 32 based on raw ranking, has not been seeded.

Cibulkova told reporters that she believes that it would not be right if Williams was seeded, saying that she believes it would just be unfair. She added that she worked hard for her rank, and that she will lose the spot that was rightfully hers. The seeding that has been announced has done exactly that, and Williams is now ahead of Cibulkova, who has been forced out of the event, which may cause controversy in coming weeks.