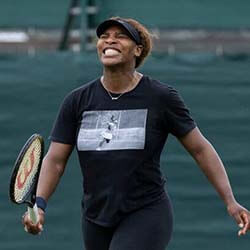 During a pre-Wimbledon conference, tennis superstar Serena Williams has revealed that she will not be competing in this year’s Olympics. She refused to tell reporters the reason behind this. She has, however, made mention of the fact that there are many reasons behind the decision but does not feel like discussing them at the moment.

Reporters also asked Williams what it would be like to miss the Olympics, to which she responded that she has not given it much thought and will continue to do so. This shocking announcement by the former Olympic giant has left many scratching their heads.

She has already won four gold medals at past Olympic Games in 2012, 2008, and 2000. The gold medals won for playing doubles were won alongside partner and sister, Venus Williams.

Unfortunately, the 2016 games were not as successful, with Williams losing in the third round of singles to Elina Svitolina from Ukraine.

The U.S. Tennis Association supports the decisions of athletes when it comes to participation, especially during a global pandemic. While they are encouraging athletes to participate, it is an individual decision that needs to be accepted and respected.

Rafael Nadal and Dominic Thiem had also stated that they will not be competing at the Olympics. Roger Federer is still deciding whether he will be competing or not and will be using Wimbledon to support his final decision. While the reasons for skipping the games may differ amongst players, there is no denying the role that the pandemic plays in it all.