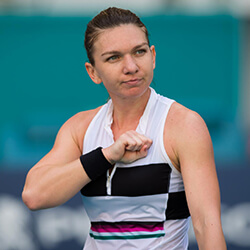 Simona Halep managed to overcome a lapse during second set to secure a 6-4 7-5 quarter final win over Chinese Wang Qiang at the Miami Open, putting the Romanian one victory away from taking her place as the world’s top ranking player. Second seeded Halep returned to from after 5-1 in the second set, and saved three set points before she wrapped up the win in 89 minutes against 18th seeded Wang.

Halep started the game in strong form, and managed to break Wang three times as she raced to a 4-1 lead before she closed out the first set after cutting off the angle on a forehand and shot the winner into the open court. Wang returned to the second set determined to win, and broke Halep three times and held love in back to back service games, allowing her to build a 501 lead. Wang came close to forcing a decisive third set as she almost broke Halep again as she jumped out to 0-40 for the 10th game, but Halep maintained her composure and played hard.

Halep has matched her best result so far in Miami, which first came in 2015 when she played and lost against Serena Williams for the finals. Halep is next set to face Karolina Pliskova and Marketa Vondrousova. Halep is also the highest seed left in the draw after Naomi Osaka exited in the third round, giving Halep the best chance of any player to claim the top ranking.