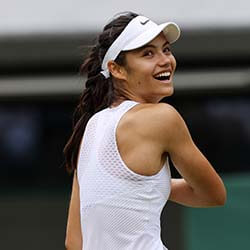 18-year-old British tennis player Emma Raducanu was forced to withdraw from Wimbledon following an injury. The sports world has come to life with mixed emotions as some tell her to toughen up while others support the decision.

During her 16-round competition against Ajla Tomljanovic, Raducanu found herself down 0-3 in the second set and appeared to be having difficulty breathing during the fourth round. She requested a doctor and subsequently left the court and never returned to the game.

She had received a late wildcard entry and was playing for the main draw of a grand slam. She has since released a statement telling fans that she feels better and wanted to congratulate Ajla on an incredible performance, apologizing for the abrupt end to the game. She added that she believed that she was playing the best tennis of her life in front of a great crowd and may have been overwhelmed by the experience of it all. It was an eye-opening experience for her and is the first step in learning what it will be like to be on top of her game when competing.

She added that she wanted to win so badly and would like to thank everyone who supported her and cheered her on, as well as the All-England Club, the LTA, her team, her parents, and friends.

While the experience may have been short-lived, she is proud of what she has achieved this week and seeks to come back stronger.  Her journey has only just begun, and she is excited to see what the future holds.