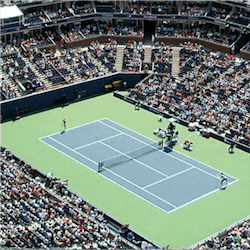 End Of A Golden Era For Tennis?

2017 has seen the steady rise of a persistent worry – that a Golden Era in Tennis is drawing to a close.  This is quite in line with Andy Murray’s prediction during last November.  Murray, having ended Novak Djokovic’s 123-week run as world’s number 1, voiced concerns over the fact that greats Roger Federer and Rafael Nadal were not long for the game due to their age – without a doubt two of the greatest players in the history of the Tennis.

Some say that Murray needs to be reminded that, despite their age, both Federer and Nadal have suffered a great deal less in terms of defeats, than he.  To top it all off, all hype will peak when the two meet at the US Open – many expect and hope, in the finals.

Yet there is also a lot of truth in the concerns that Murray has voiced.  This especially after Federer’s decision to rest it up after injuries – further serving to cement the idea that he was in fact in the final stretch of his career.

Even more unsettling to the golden boat is the fact that the total tally of Nadal’s points is the lowest ever accumulated by a No. 1, since 2009.  Yet it would be unfair to consider this without also taking into account that Nadal started out the year in 9th position overall – willing and fighting himself into top spot by the close of 2017.

Tennis has been waiting for a while now for new potential to truly step up and be noticed.  Federer recently secured his 19th major at Wimbledon – with Nadal looking ready to go after having recently failed to impress as far as performance goes.  The Big Four of Tennis have won 45 of the past 50 majors, and whilst this is encouraging as far as elite players go, it also raises concerns about the seeming lack of fresh talent.

Bulgarian player Grigor Dimitrov is certainly pleasant to watch, but not quite up to the challenge in unadulterated substance – a much needed quality in every up and coming World No. 1.  Austrian Dominic Thiem and Canadian Denis Shapovalov both show great promise and potential – but it’s a matter of still having to be polished quite a bit before hitting it big time in a big way, especially by Pro-Tennis standards.

It will be a while yet before the rumblings of a new day break into full fruition, but those in the know all agree – it’s time for an uproar.