Thiem Gets Fright at Paris Masters

Thiem’s Paris Masters’ Round of 32 Wobble 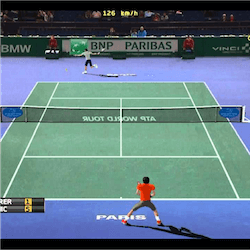 Austrian tennis star Dominic Thiem, a semi-finalist in the past two ATP Paris Masters men’s singles and the fifth seed in this year’s hard-court tournament running till 5 November, got a bit of a fright in his Round of 32 match on Tuesday.

His first set against unseeded German Peter Gojowczyk was no walkover, but Thiem managed a break in the fifth game, going on to win the set 6-4. The second set was a back-and-forth tussle, with Thiem edging ahead at last with a break in the 11th game, only for Gojowczyk to break back and then win the tie-break 7-3.

Tournament 17th seed Lucas Pouille of France withdrew before his Round of 64 opener against Kyle Edmunds, so the Brit’s first opponent in this year’s Masters is American Jack Sock. It’s been an unlucky start for the French: Gael Monfils also withdrew before the opening round, in which he was scheduled to play Italian Paolo Lorenzi, and he will miss the Davis Cup too. He hasn’t got his knee right yet, so he’s ended his year early.

Nadal Favourite in the Betting

At the time of writing, the Day 3 action was about to kick off, featuring opening matches for all the big guns at the top of the betting. Rafael Nadal, in the absence of Roger Federer, is the only possible tournament favourite, given the year the two veterans have been enjoying. The Spaniard is being offered at $1.50 on most online betting sites.