Williams To Be Cheered On By Royalty 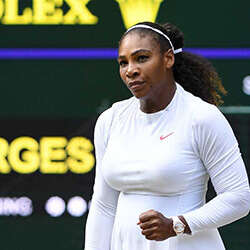 It has recently been reported that Serena Williams will be receiving support from a special fan ahead of her next game, which will be in the form of the new Duchess of Sussex, Meghan Markle. The Duchess will be attending Williams’ upcoming game at the Wimbledon final, but Williams has told reporters that she believes that she will be the only royalty at the event.

Williams stated to reporters that as she’s done so well at Wimbledon in the past, she considers herself royalty on the courts. The famous player is just one win away from winning Wimbledon for the eighth time in her extremely successful career.

Williams is set to face Angerlique Kerber, a repeat of the same game that took place in the 2016 final. If Williams succeeds, it will mean a record-breaking winning streak for the American player, who has seen 23 Grand Slam titles so far in her professional career. A victory against Kerber will put Williams on the same level as legendary Australian player Margaret Court.

Williams went on to state that before her current season, she hadn’t considered herself the queen of the court. The player is back after a 10 month absence from the sport after giving birth to her first daughter Alexis Olympia. Despite her long absence, and a shaky start, Williams saw one of her best campaigns so far, and is set to take on the final as Wimbledon draws to a close for this year.