Wimbledon 2017 Full of Thrills and Spills 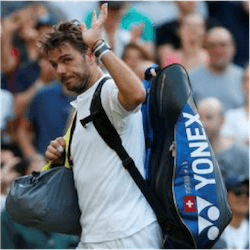 It would seem as if the absence of Serena Williams from Wimbledon 2017 isn’t the only upset threatening to topple the Grand Slam apple cart.  Maria Sharapova will also be missing out on the action this year due to a slow comeback from a doping ban.

The gaping hole left by the absence of Williams and Sharapova is exacerbated even further by the fact that Petra Kvitova seems to be the only hope for a replacement as favourite.  Kvitova returns to Wimbledon this year after having sustained injuries as a result of a stabbing during last December.

Says 18-times Grand Slam winner Evert, “I think at the top of the game, it’s very chaotic right now.  I think there’s a lot of fragility.  I think the players that have been at the top have not lived up to the billing.  I feel terrible saying that, but everyone who’s reached number one, they haven’t carried on the momentum, and they haven’t stepped up and really embraced that position of leadership on and off the court.  You really can’t count on any one player right now like you could count on Serena in the past.”

In a surprise move, Stan Wawrinka was knocked out on the first day by Daniil Medvedev.  32 year old Wawrinka, 3-time Grand Slam champion, had to call for ice for a knee injury on various occasions between points.

At 35, Roger Federer is an unlikely favourite – and yet still plays incredible Tennis, despite the challenges of age.  He did, after all, win the Australian Open at the beginning of this year.

Nadal will have to pull out all of the stops at this year’s Wimbledon Grand Slam event, being more inclined towards performing well on clay than on grass.  His knees are ill suited for fast-paced games on clay, and seemingly even less so as far as a grass surface goes.

All of Britain will obviously be cheering loudly for Andy Murray – who, incidentally, has also only recently recovered from a hip injury.  Murray was even shunned on the betting front, with statements to the tune of, “Despite going into the tournament as the reigning champion, betting trends suggest punters were very weary of backing Murray this year,” Oddschecker spokesman, Alex Pindar.

Recent injuries very seldom inspire punter confidence, and neither do comebacks from doping bans and the like – 2017 is going to be a very interesting year indeed.