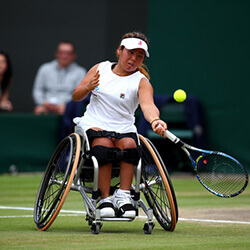 The Wimbledon wheelchair singles will be starting soon, and will be headlined by trio Lucy Shuker, Alfie Hewett, and Gordon Reid. Reid, who is currently the world number five, and who won the title during the 2016 event, will begin his latest campaign against Joachim Gerard, who is one place lower on the roster.

Hewett, being a little higher on the world list at number two, is set to face off against France’s Stephane Houdet, where the two will be competing for a spot in the semi-finals.

Shuker will be matched against Aniek van Koot for the women’s singles. Van Koot is the former world number one, but the last matches between Koot and Shuker have seen the latter coming out as the victor every time.

Reid and Hewett are also planning to team up for the doubles, which will be their chance for a third consecutive win for the pair. The first match for the two will be against Shingo Kunieda, from Japan, and world number one, along with his partner Argentinian world number three Gustavo Fernandez.

Hewett told reporters that Wimbledon is special to him for many reasons, one of which was the support that he received for being a home player. He added that the entirety of the British nation backs those that participate in Wimbledon, and that he feels at home when playing on ground within his own country. This year’s Wimbledon will also see the event’s first quad doubles match.