World No. 5 Has A Go At Bernard Tomic 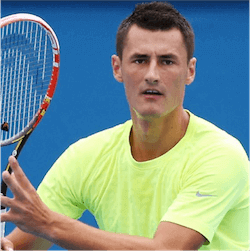 Lleyton Hewitt may have committed to stick to his gentleman’s guns on the topic of Bernard Tomic ahead of the Davis Cup first-round tie in Brisbane, but there was no such resolve from Germany’s world no. 5, Alexander Zverev.

Zverev obviously had to reservations about taking a shot at more than just a tennis ball when he laughed off Tomic’s claims that he would be returning to big league tennis before the year was out. The German went on to poke some serious fun at Tomic’s brief appearance in television’s reality show, “I’m A Celebrity…Get Me Out Of Here” as well as his very early departure from the South African jungle setting of the show.

And brief it certainly was. Tomic lasted all of three nights on the show before claiming that he had become depressed and wanted to return home (to Australia). The provided endless entertainment for the German, who jeered at the fact that Tomic had been away for a mere “six hours” before wanting to come back home.

In all fairness, Zverev did find it in his heart to say that he hoped that Tomic would return to a place where he could resume playing good tennis, because everyone who had ever watched him play (Zverev included) knew that he (Tomic) had talent.

Zverev Aware Of His Good Fortune

Zverev will go up against Alex de Minaur in the first round tie. Nick Kyrgios will take on Jan-Lennard Struff at Pat Rafter Arena shortly after.

Zverev is apparently filled with gratitude at the unique opportunity of playing professional tennis at his age, saying that other guys of the same age as he were running around trying to find a regular job and usually ended up working 12 hours a day after finishing college.

The German went on to say that he felt lucky to be doing what he loved and being able to share that with thousands of people all over the world.

Meanwhile, Kiwi league star Benji Marshall has reached out to what he describes as a “troubled” Tomic, saying that constantly being in the lime-light often took its toll on professional athletes and that now was the time to be showing Tomic some support.

Tomic was the making of his own unpopular fate when he announced that Australia could not win the Davis Cup without him and that team captain Lleyton Hewitt was well aware of the fact.