Team USA Back In IWF In Full Force 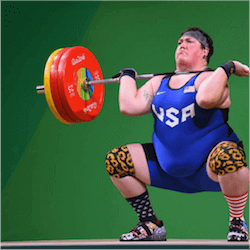 As expected, the Americans have done it.  Sarah Robles (+90kg) has won three gold medals and is the new IWF World Champion.  Robles is the very first American woman to be named IWF World Champion since Robyn Byrd Goad in 1994.

Robles also made headlines last year at the Rio Olympic Games, when she became the first American athlete to win a weightlifting medal in 16 years.  Last year, Robles took the bronze at Rio.  This year, she won three gold medals for the very same events that she competed in, in Rio’s Olympic Games: three snatches in 118 kilograms, 122 kilograms and 126 kilograms.

The competition that Robles had to go up against was tough: Laurel Hubbard from New Zealand and Egyptian national Shaimaa Ahmed Khalaf Haridy both initially qualified with higher qualifying totals than Robles’ 275 kilograms.  Hubbard and Haridy ended up securing a podium appearance each with a silver and a bronze, respectively.  But it was Robles who really stole the show.

This isn’t the first time that Robles has won gold for her country in this year.  In July she took home the gold for a snatch, clean and jerk at the Pan American Weightlifting Championships.

Be that as it may, the IWF World Champion title will no doubt be the highlight of 2017 for Robles.

Laurel Hubbard may have borne the brunt of much controversy surrounding her transgender status, but on Wednesday she was nothing short of a very proud Kiwi having won the first medals for New Zealand at the IWF World Championships.

Hubbard opened Wednesday by claiming the silver for a 124kg lift in the snatch in the +90kg division.  Her combined lift of weight in excess of 275kg secured the overall silver medal for New Zealand.

No New Zealand weight lifter had ever won a medal for New Zealand in the IWF Weightlifting Championship before.  Hubbard too, has had a fantastic year in the competition arena.  She managed to secure three gold medals in the 2017 Oceania Championships.

Negative remarks by the likes of Sarah Robles’ coach ahead of the competition is at best, unreasonable and unfair.

The day belonged to the proud Kiwi.