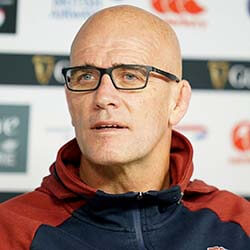 Former England defense coach John Mitchell has denied allegations over a fallout with Eddie Jones being the reason behind his decision to quit the role. Mitchell only three months before resigning signed an extension to his contract.

The New Zealander has in the meantime taken up a coaching role at Wasps.

Rumour had it Mitchell resigned after an argument with Jones over whether he would be permitted to attend a cricket match starring his son, Daryl, on one of his off days. Son Daryl is an international cricketer for New Zealand, and plays club cricket for Middlesex. But instead of his resignation having been the result of a disagreement with Jones, Mitchell has now explained the decision as a desire to leave behind international rugby. He described the conditions of working for England within the confines of a tight bubble has having taken their toll on his quality of life.

Even so, bubble restrictions were eased rather significantly over the space of the summer, which had been Mitchell’s final campaign with England. But the New Zealander has insisted that his decision had been reached already in April, and Jones informed of his plans in May.

Mitchell furthermore insists that he continues to enjoy a good and professional relationship with Jones.

He also says a gold medal and World Cup are no longer his main priorities. If that were the case, he said his decision might have been different. But for right now, Mitchell said he feels it important to live by everything he values the most.