Jacindamania: When The Gamble Pays Off 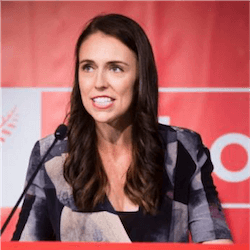 What started out as a somewhat ill defined manifesto involving two very broad-based concepts of hope and change has come full circle with the election of Jacinda Ardern, officially New Zealand’s youngest Prime Minister in 150 years.   Merely three months ago Ardern was quoted as saying that in order for her to be voted the newest leader of the Labour Party, her entire rest of faction would have to be hit by a bus, leaving her as the only survivor.

Accidents aside, it seems that it’s in fact the simple nature of her resolve that has elevated Ardern as the people’s choice: affordable housing and clean rivers in which to swim, free tertiary education and putting an end to child poverty.

First Party To Back Labour

It took all of 26 days to get to the point, but Winston Peters finally came to the table on Thursday, announcing that New Zealand’s First Party would be backing Jacinda Ardern every step of the way.  The announcement allows the Labour Party to form an alliance with the First Party as well as with the Greens, making for a majority in parliament.

Peters cited the motivation behind the support to be the ever-changing global environment, believing the Labour Party to be best able and equipped to deal with the social and financial welfare of the country during uncertain times.

Peters said that for too many New Zealanders, capitalism had become an enemy instead of an ally.  He went on to say that capitalism needed to regain its human face, and that that was what the Labour Party stood for.

Ardern was obviously taken by surprise by the outcome of the elections.  So surprised in fact, that she had initially refused to run for party leader.  Not once, not twice, but seven times.  A week before August 1st, Ardern was approached by then Labour Party leader Andrew Little.  Little believed that Ardern was Labour’s only hope of securing office after having been beaten to it for the last three terms.

Ardern responded by saying that her anxiety had gotten the better of her and that this was what was stopping her from conceding to Little’s requests.  What Ardern had actually wanted was a family and a lot more sleep.  What she got was the hopes and dreams of an entire country.

Ardern’s charm and offbeat contagious sense of humour managed to communicate something to her voters that words could not: that an entirely different future was possible.

Anticipation Ahead Of Upcoming Elections

New Zealand Elections 2017 The country’s next general election is around the corner – with voting stations opening already on 11 September.  What initially promised to be a thing of no-contest has now taken quite a surprising turn – all in the form of the youngest leader in the history ….