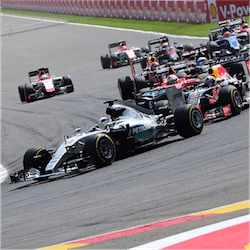 A Milestone For Spa-Francorchamps

This year’s Belgian Grand Prix will serve as Spa-Francorchamps’ 50th Grand Prix event.  The 19-turn circuit has been host to Formula One Grand Prix since 1925.  This serves to warm the cockles of many a Grand Prix driver’s heart, but perhaps most of all, that of the Belgium’s F1 Team Haas.  The circuit is a firm favourite of Haas drivers Romain Grosjean and team mate Kevin Magnussen.

Despite their fondness for Spa-Francorchamps, the Haas F1 team has had a difficult run-up to the Belgian Grand Prix, having experienced a particularly difficult struggle in Hungary, due to – quite ironically – the slow nature of the track.    The fact that Spa-Francorchamps is a high-speed, low-downforce track promises a measure of relief as these conditions are much more suitable to the particular driving style of Team Haas F1.

Hopefully this will be enough to turn the tide and hit the reset button, as it were.

Expectations Ahead Of Belgian Grand Prix

McLaren’s Fernando Alonso certainly is looking forward to racing at Spa-Francorchamps, saying that the first race after the summer break is his favourite of the annual F1 season.  He put this down to feeling rested and recharged after a time away from the track, with family and friends.

According to Alonso, Spa-Francorchamps is a legendary racetrack and deserving of its reputation.  He cited Eau Rouge as his favourite bend on the circuit – it turns into a steep gradient, and with being seated so low in the car, the driver sees only the blue skies above when ascending, an experience described by Alonso as being completely surreal.

Force India’s Sergio Perez agrees that the Belgian Grand Prix is especially enjoyable being the first race after a well-deserved rest.  He also described Spa-Francorchamps as being home to the most passionate fans in the business.  He cited Pouhon as being his particular darling as far as the corners go, as getting it just right was exceptionally tricky, but immensely rewarding.

Max Verstappen’s favourite Spa-moment?  You guessed it, the sheer number of orange fans in the grandstands!  The Red Bull Formula 1 Grand Master described the Belgium Grand Prix as feeling like home, as there wasn’t a Dutch alternative and as a result many Dutch fans routinely make their way over the border to support their hero at Spa-Francorchamps.

The 2017 Belgium Grand Prix returns to Spa-Francorchamps on the weekend of August 25 to August 27.