Alonso Will Be Good To Go For 2021 Season 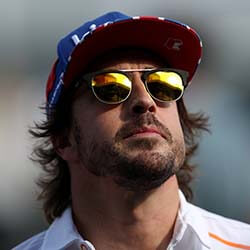 Despite a broken jaw suffered in recent cycling accident, two-time F1 world champion Fernando Alonso’s Alpine team says it remains confident the Formula One star will be back on the grid in time for the start of the new season in March.

The team issued its prognosis in a short and determined statement, saying the 39-year-old’s “minor” operation had been a success and that he’s expected to be fully back in the swing of things for his anticipated comeback this year. The team-Alpine statement also revealed that Alonso was being kept under observation in a Switzerland hospital, but that he’s expected to resume training in time to properly prepare for the coming season.

His intended return marks his first appearance on the F1 grid after a two-year-long absence from the competition. Testing for this year’s campaign is scheduled to begin in Bahrain at the end of the month – only 4 weeks ahead of the first race in the Gulf Kingdom on March 28.

Alonso has enjoyed an illustrious career on the track, competing in 311 Grands Prix, and reigning victorious in 32 of those events. Before departing to join McLaren for a single season at the end of 2006, he won back-to-back championships for Renault in 2005 and 2006.

He eventually quit the sport altogether in 2018 but is due to be making his return to F1 to compete alongside teammate Esteban Ocon at the rebranded-to-Alpine Renault for the 2021 season. He steps into the vacant spot left by Daniel Ricciardo’s switch to his former alma mater, McLaren.