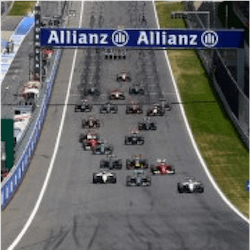 Honda Chief Yusuke Hasegawa is looking forward to seeing how Honda will perform in Austria during the 2017 Austrian Grand Prix, set to take place on Sunday the 9th of July.   He expects that McLaren will show improved competitiveness as a result of Honda introducing its Spec 3 power unit for the first time this coming weekend.

Said Hasewa, “At the previous round in Azerbaijan, we were able to bank our first points of the year and I think it brought some brightness into our team.  We also tested the updated PU, the Spec Three, with Fernando [Alonso] on Friday and we were able to confirm some progress in terms of the power output.  We have proceeded with the mapping back at the factory utilising the data we collected and we are going to bring the Spec Three for both drivers this weekend.”  Referring to Fernando Alonso and team mate Stoffel Vandoorne.

Honda is no doubt hoping to take a huge step forward after having been dubbed slow and sluggish after the team’s recent performance at Baku and Montreal – the type of performance, which can, at best, be described as “slightly better than before”.

This weekend at the Red Bull Ring promises to be full of surprises – if not on account of Honda McLaren, then at least as far as Michael Schumacher’s 2003 record is concerned.  Schumie went on to win the 2003 title, with the F1 circuit only returning to this particular track in 2014.  Lewis Hamilton gave the current record a proper run for its money by getting within a few hundredths of a second of smashing it.

This year has seen F1 cars dashing around corners and bends at an average of 0.7 seconds quicker at every single circuit, than they did twelve months ago.  This makes for a very good chance that Schumacher’s record time may indeed be bettered during the 2017 season.

The question is, as always, by who?

Says Mario Isola, head of car racing at Pirelli, “The natural selection for this type of circuit is the three softest compounds in the range.  Having said that, we’ve seen in the past that Austria also has the capability to spring a few surprises.  When we get there we’ll see if one stops or two are more likely, but it will be important for teams to build some flexibility into the strategies as well.  Longitudinal forces – so traction and braking – are the key aspects in Austria, rather than cornering.  In spite of that, there’s still a good chance of the lap record coming down, as we saw in Baku.”