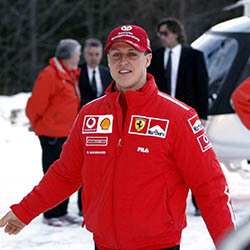 Dr Jean-Francois Payen, Michael Schumacher’s physician, has decided to go public with some details about the treatment that the legend of the motorsports world has been receiving since his devastating skiing accident in France in December 2013.

Schumacher, who took the Champion title at seven Formula One races, has not made a public appearance since the accident, with his family refusing to compromise on their privacy as he makes his recovery.

Dr Payen was the first to confirm that the legendary driver had come out of his coma five years ago, and has since given some insight into the therapy Schumacher’s been undergoing. He spoke of there being a plan extending for between one and three years for Schumacher’s regeneration and stated that he visits the injured man occasionally while also keeping his family up-to-date on any and all progress he sees.

Because he has to respect patient-doctor confidentiality, there are strict limitations as to what Dr Payen can reveal about his patient’s current state, but he was able to tell us that there is constant progress being made and that Schumacher’s general state can be described as positive.

Dr Payen could not speak highly enough of Schumacher’s wife, Corinna. He said that she has done absolutely everything necessary to help her husband succeed in his recovery and credited the woman’s remarkable will power to the progress her husband has made thus far. He added that she is also well aware of what lies ahead for them going forward.