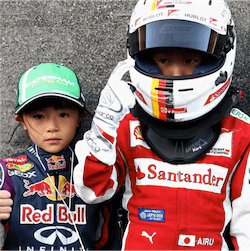 The latest word on the street in the world of motorsports is that the recently axed grid girls will be replaced by grid kids, going forward. Formula 1 recently confirmed that F1 youngsters belonging to motor-racing clubs such as those competing in go-karting, will in future appear next to F1 drivers on the grids before the commencement of races.

The announcement follows the recent decision by Formula 1 to no longer make use of grid girls due to modern-day societal norms having changed to the point that this was no longer something that was in tune with the professional code of motorsports.

FIA President Jean Todt said recently that the “grid kids” concept was a logical move, affording young drivers the opportunity to stand alongside those whom they looked up to; their heroes. Sean Bratches, F1’s managing director of commercial operations, agrees, saying that there probably wasn’t a better way to inspire the next generation of Formula 1 drivers, than this.

Bratches made the initial announcement regarding the termination of grid girls.

Eddie Hearn: Why Boxing Is Different

The F1 decision follows a similar decision by the world of professional darts, with the Professional Darts Corporation having recently announced that they would no longer be making use of their walk-on girls at professional darting events.

Boxing promoter Eddie Hearn, however, has said in no uncertain terms that he did not plan to follow suit, not now, and not going forward. Boxing’s ring card girls were here to stay. Hearn promotes Anthony Joshua, the fighter set to compete against New Zealand’s Joseph Parker, come next month.

According to Hearn, there is a major difference between what the girls were doing during Formula 1 events and darting events, and what they are doing in the world of boxing. He said that in F1 and darts the girls would essentially be there to polish the ego’s of drivers and competitors by announcing their presence, whereas in the world of boxing they were performing the functional task of letting the audience know which round was coming up next.

Heart went on to say that boxing’s girls did not appear on television and that they were merely doing a job.

The decision by F1 to scrap the grid girls idea enjoyed huge support from many avenues, most notably the Women’s Sport Trust, a charity committed to raising awareness and visibility of women in sport.