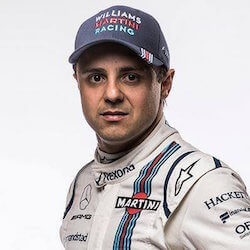 Former Ferrari F1 star driver Felipe Massa has announced that he will be retiring after the final Brazilian Grand Prix scheduled to take place on the weekend.  Massa has driven for Ferrari, Sauber and Williams throughout the span of his Formula 1 career.  Massa had previously announced his retirement too, but was pursuaded by Williams to return for another year.

Speaking to the press, Massa said that he had now officially enjoyed 4 fantastic years with the team at Williams but that the time had come to finally step down.

The main motivation behind Massa’s decision to stay on for another year after having decided to retire at the end of last year, was Valtteri Bottas’ leaving Williams for Mercedes.

Meanwhile in tyre manufacturing land, Pirelli  has announced that it will be bringing only the very top of the range of their F1 racing tyres to the Brazilian Grand Prix.  The track at Interlagos is one of the most intense and challenging tracks included in the Formula 1 annual season.  It’s physically demanding and the setting is a challenging atmosphere.  The local climate is well known for its unpredictability, capable of heavy outbursts of rain but also of intense heat waves.

The tyre nomination for Brazil is much softer than in the past, what with the climate having gone through some extreme changes over the last number of years.

The track too, was re-surfaced relatively recently, which flattened out some of its infamous bumps.  Brazil is the second shortest lap of the F1 season – the only one shorter is Monaco.  What this translates to is that the cars are almost always in some form of a turning motion.  This can be very demanding on especially the tyres.  Because of the track running anti-clockwise, its especially the right tyres bearing the brunt of Brazil.

Pirelli’s Mario Isola has announced that some of the manufacturer’s softer tyres will be used in Brazil this year.  The softer tyre will make for an even faster lap around the relatively short track.  With the levels of overtaking involved in Brazil, its important that pit stops are orchestrated even more effectively than usual, in order that the sporadic effects of traffic may be minimised.

Isola further confirmed that no driver had selected more than one set of medium compound tyres, effectively meaning that the weekend will run on soft and super-soft tyres.  Tyres that are custom-designed to handle raw speed.