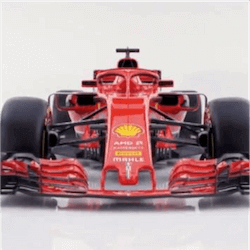 Formula 1 may have blasted into the new year with guns a’ blazing what with all sorts of revelations and proposed changes, the replacement of the grid girls with grid kids being but one example of many other ructions and rocking of the racing boat, but not all is negative in vroom-vroom land, thanks to Ferrari.

The manufacturer recently revealed the newest addition to its brand: the SF71H model, fitted with every conceivable bell and whistle in especially the aerodynamics department, in an attempt to keep up with the leaps and bounds that top rival Mercedes has been making of late.

Ferrari technical director Mattia Binotto said that the main differences between the new model and last year’s car were a slightly longer wheel-base, more aggressive-looking side ducts and a much narrower main body.

The Promise Of A New Day

Ferrari driver Kimi Raikkonen made no secret of his high expectations of the SF71H, saying that it looked nice and that if it looked nice, in the true spirit of the Ferrari brand, it would be very fast also.   The true test will be how it measures up to the newest model from Mercedes and the manufacturer as well as the fans won’t have to wait too long before all is revealed, what with next week’s pre-season testing in Montmelo in Spain.

Sebastian Vettel shares Raikkonen’s excitement, saying that the team could not wait to get onto the track and see how the new car performs, which is, according to Vettel, a huge step up from last year’s car.

Despite the numerous victories that were to be had during last year, most notably those by Sebastian Vettel, Ferrari really struggled on high-speed circuits with long straightaways. It’s not all flash and dash either; the new car also features the added safety feature of a protective halo device around the cockpit, a concept that has been made mandatory for all Formula 1 cars competing this season.

Raikkonen said that the halo had not been a terrible bother when it was tried out last year, but that in the model it was even less visible, what with the car having been developed around it right from the drawing board.

Ferrari hasn’t won any major F1 titles since 2008, with Raikkonen having claimed the team’s last driver’s title back in 2007. The new Formula 1 season opens on 25 March at the Australian Grand Prix in Melbourne.

May the best car win.