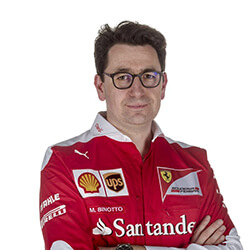 Mattia Binotto, team principal of Ferrari, has said that they are determined to sharpen their race management over the last few races of the current season in order to ensure that they are placed well for next year’s season. The team has let a number of wins slip past them so far this year, which can be blamed on strategy problems, along with operational and driver errors. Binotto told reporters that they have started the last six races from a pole position, but have only been able to win three, and that they want to do better than that in the future.

The team had started out with a vehicle that was competitive only on circuits primarily made up by long straights, which had played to their standard setting performances of their engine, and did not expose the lack of grip that was displayed by their chassis. Aerodynamic upgrades in the last few races have closed the gap between them with both Mercedes and Red Bull in terms of cornering performance, and the Ferrari are now heading to the upcoming US Grand Prix in Austin as the team to beat.

Binotto added that there had been significant performance improvements compared to how they started the year, and credit had to go tot he people on the track and at Maranello, who had worked hard to fix their many problems. Their main opponent is Lewis Hamilton, who is currently on the verge of earning a sixth world title.