Fly-Away Singapore Up Next For Grand Prix 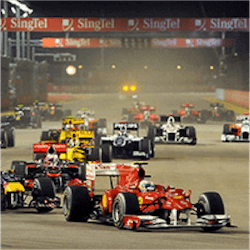 Lewis Hamilton on Saturday secured his 59th career win at the Italian Grand Prix.  The Mercedes driver now has 239 points – 3 more than rival Sebastian Vettel.  Ferrari’s Vettel finished more than half a minute behind Hamilton’s team mate Valtteri Bottas – finishing in third place.  This after Vettel’s podium finish had already come under threat from Daniel Ricciardo, who had managed to climb from 16th place on the grid to 4th at the finish.

Vettel and Ferrari had been in the lead all season but seemed to battle in the rainy conditions on Saturday and had a real struggle keeping up with Mercedes’ overall pace.  This on a Monza circuit made up of long stretches requiring high speeds – conditions very much more in line with Mercedes’ prowess that that of rival Ferrari.

Ferrari fans did not hide their disappointment – having hoped for a much different outcome on the weekend marking Ferrari’s 70th anniversary.  The fans in red booed the Mercedes driver during the podium celebrations.  Hamilton responded by saying that he loved the passion of the Ferrari fans and that Italy reminded of the energy at Silverstone.

After having made a brilliant start to the 2017 Grand Prix racing season, Sebastian Vettel has fallen back considerably – having won only one of his last seven races.

Vettel’s fellow Ferrari team member, Kimi Raikkonen, finished in fifth place – the same position as where he had started the race.  Raikkonen put up a battle with Bottas at first, but had a bit of poor luck rubbing shoulders with the barriers later on.

Up Next: A Fly Away To Singapore

Red Bull has expressed concerns regarding the performance of its Renault engine – feeling that the team had been held back in terms of both power and reliability.  Singapore, however, is one of the few tracks on the GP calendar that is exceptionally well suited to Red Bull’s car – comprising of mainly low-speed characteristics.

Red Bull’s Formula 1 fuel supplier ExxonMobil has announced that it expected to upgrade Red Bull’s fuel grade by the time Singapore rolled round – hoping to boost the underdog’s performance.

ExxonMobil joined fuel forces with Red Bull in 2017 – after having terminated a long-term relationship with McLaren.  The initial plan was to introduce the fuel upgrade already at the British Grand Prix, but the manufacturer decided to hold it off until Singapore.

The Singapore upgrade will be the fuel manufacturer’s last upgrade for the year, after which its attention will be turned towards next season.