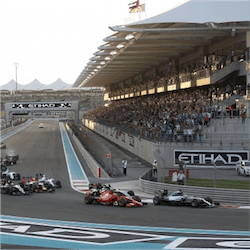 Formula 1: As We Live And Breathe

Whichever way you turn, Formula 1 is all the rage right now.  With the season drawing to a close with the Abu Dhabi Grand Prix on the weekend, it’s no surprise either. The name on everyone’s lips: Lewis Hamilton.  However, if you think that the Mercedes super-star is going to have it easy on the weekend, think again.  After all, Max Verstappen, Sebastian Vettel, Daniel Ricciardo, even Mercedes teammate Valtteri Bottas, all have equal motivation for wanting to end the season on a pristine note.

Then again, the odds are all in favour of Hamilton.  Since the introduction of V6 hybrid units (2014) Mercedes has been the unrivalled champions at Abu Dhabi.  This, of course, still includes Bottas in the nifty mix.

Will This Year Be Different For Ferrari?

Try as they might, Ferrari have not once won the Grand Prix at Abu Dhabi.  Eight times they have tried, and eight times they have failed to make the cut.  The two times that they did manage to finish in the runner-up position were both thanks to Fernando Alonso.

The Abu Dhabi Grand Prix is scheduled for 55 laps.  Sebastian Vettel will really have to step it up if he is to beat Hamilton’s 181 out at the front at Abu Dhabi.  What with Valtteri Bottas and Max Verstappen each gunning for a new dynamic too, this will be no easy task.

From One Type Of Track To Another

What with Formula 1 fever currently at an all-time high, there was probably no better time than the present for the McLaren Formula 1 team’s appointment of their newest simulator driver.  25 year old Rudy Van Buren is the hero in the hot seat, having beaten 30,000 other potential hopefuls to a 1 year contract with McLaren as its official eSports simulator driver.

It was a difficult thing to image under the rule of former McLaren team boss Ron Dennis.  Somewhat of a control freak, Dennis even forbade the hanging of jackets over the all-clad-in-white office chairs at the company’s headquarters.  New team boss Zak Brown is an altogether different type of leader and one that has embraced the role of eSports in mainstream Formula 1 with open arms.

It’s been a long time coming, with Nissan having been the pioneers in recognising the value of simulator driving with their Gran Turismo selection process in order to earmark new drivers.  McLaren seems to be following suit in wholehearted fashion and we’re excited to see what the results will be for the exciting world of Formula 1 racing.