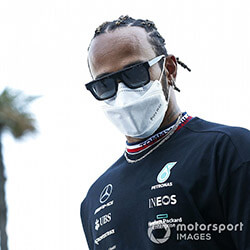 F1 champion this week had a strong stream of criticism for those who have voiced their approval of Naomi Osaka’s withdrawal from the French Open.

Speaking before the weekend’s Azerbaijan Grand Prix, Hamilton praised Osaka for her bravery in sticking to her guns while criticising the organisers of Roland Garros for their treatment of the world No. 2 following her controversial decision not to address members of the press.

Hamilton furthermore admitted that he too had struggled on several previous occasions throughout his career with the high and often negative demands that form part of competing on a global stage.

Osaka this week attracted strong criticism for her decision to withdraw – criticism Hamilton has now condemned, saying he especially condemned the actions by officials from a position of understanding what it’s like to compete internationally at such a young age.

Hamilton said the backlash suffered by Osaka was ridiculous and that people should taking into account that she’s a human being and that she’s simply not well enough to do what organisers were expecting of her. He added that the 23-year-old is an exceptional athlete and human being and that her activism all throughout the unsavoury situation has had a massive impact on the sporting world.

The F1 champion blasted officials for having fined someone for talking about their state of mental health and well-being, saying that this was unacceptable behaviour on their part.

Roland Garros Grand Slam officials have since big backlash made a promise to bring about the necessary changes regarding how players experience the media.