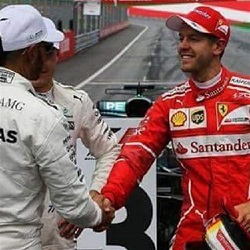 Sebastian Vettel has now won the first two races for the 2018 Formula 1 season, and Lewis Hamilton wants to stop him in his tracks!

After seeing the German driver take his second successive Formula 1 Grand Prix, Hamilton, a world champion in his own right, is eager to get to grips with Vettel.

Vettel won in both Australian and Bahrain, going on to score maximum points for the first two races to open the season, and these put on top of the Drivers’ Championships, 17 points ahead of Hamilton, who drives for Mercedes. The British driver opened the season at second position in Australia, taking third in Bahrain, and the latter saw him coming up from ninth place to secure his place on the podium.

As delighted as Hamilton was to get the third place position in Bahrain, he is very eager to win his first race for this season, and hopes that this weekend’s Chinese Grand Prix, set to take place in Shanghai, will be his moment. He spoke of his eagerness to get his first win under his belt, and stated further that he was pleased that the races were back-to-back, because the drivers were coming on strong.

Hamilton went on to say that he thought that the Shanghai race was going to be a close one, especially since the Ferraris have shown how fast they can move. He stated that the track was a good one for him, however, and he was aiming to get the car where he needed it in order to take the fight to Vettel!