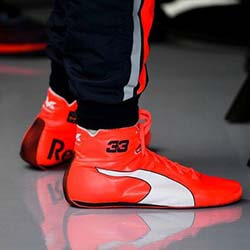 It’s a classic case of if the shoe fits.. and the latest drama has a surprising focus – that of footwear. When Max Verstappen’s racing boots had not arrived in time for the Azerbaijan Grand Prix last weekend, New Zealand F2 racer Liam Lawson lent a pair of boots to the legend. The team had, of course, attempted to use Sergio Perez’s spare pair but they were too small.

As the only person with the same size feet as Verstappen, Lawson happily lent his “plain Puma boots” to Verstappen for the weekend. He quickly remarked that while he was not able to make it to the F1, his boots did.

Unfortunately for Verstappen, Lawson’s boots appeared to be unlucky, and he blew out one of his rear tyres while leading the final stages of the race. He kicked the car out of frustration, once again shining the spotlight on the lent pair of boots. Of course, tyre manufacturer Pirelli claims the malfunction came about as a result of debris on the track. Nonetheless, it cost Verstappen the race.

The unlucky boots also took their toll on Lawson during the F2 event, where he started with a pole position but ended up placing sixth in the event.

The controversy surrounding these shows has had the Formula 1 world up in arms. Surely the simple act of sharing boots is not to blame for Verstappen’s defeat?