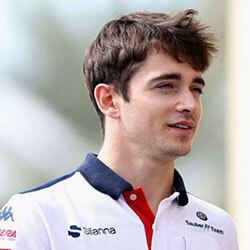 Charles Leclerc has kick-started his Formula 1 driving career by beating Sebastian Vettel during the benchmark before topping the leaderboard times in the second day of testing at Abu Dhabi.

The driver is currently preparing for his graduation to Ferrari for the 2019 season after he ended his rookie season with Sauber in the Abu Dhabi Grand Prix. Leclerc has driven for Ferrari in the past, which includes a run at Monza earlier in 2018, although he was never an official driver for the team.

His latest boast comes in the form of his setting the fastest time during the opening for hours of their test runs, which continue until the end of the day. He made it to the top of the times during his second hour, claiming a 1 minute, 26.928 second lap, and then managed to take another two-hundredths off of that time later on in the morning, leaving him a tenth slower than his 2019 teammate Vettel’s benchmark time.

The 21-year-old then continued to cut his time even further not long after midday, and set a time of 1 minute 36.550 seconds, which was three tenths clear of Vettel’s best for the test. Alongside Leclerc is Pierre Gasly, who is getting a test of some of the big teams in the F1 roster as he himself prepares for his 2019 move to Red Bull. Gasly, who drove for Red Bull for testing in 2017, set the second-fastest time, 1.4s behind Leclerc.