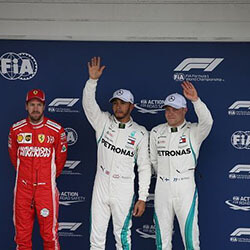 Five-time world champion Lewis Hamilton has won the Brazilian Grand Prix, a victory that also earned him the constructors championship title for the fifth consecutive year for the Mercedes team.

The British 33-year-old took advantage of a crash that saw Max Verstappen lose his lead in the last stages of the race, but Verstappen managed to regain control and steered his car to second place despite worn tyres.

Kimi Raikonnen came in at third place for his 150th start for Ferrari ahead of Daniel Ricciardo, who was driving second for Red Bull. Valtteri Bottas of Mercedes claimed the fifth position for Mercedes, while Ferrari’s Sebastian Vettel crossed the line in sixth place.

The win for Hamilton has all but destroyed Ferrari’s dreams of stopping Mercedes from claiming another title, but has earned the British driver his 10th win of the year and the 72nd of his career. It was also the first time that Hamilton has won a late-season game after claiming a driver’s title.

After Vettel came Sauber’s Charles Leclerc in seventh place ahead of Romain Grosjean and Kevin Magnussen, both driving for Saab. Behind them in 10th place was Sergio Perez, lead driver for Force India.

The race-changing moment came on lap 44 of 71, where Verstappen collided with Force India’s Esteban Ocon in the Senna S curves, which forced Verstappen to lose his lead. Ocon was penalised with a 10-second stop-go penalty, while Verstappen was forced to complete the race without a pit stop.