Massa To Race For The Last Time At Dubai 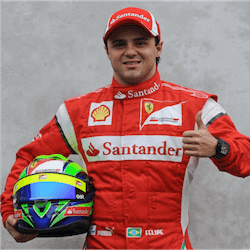 Massa Set To Retire At Dubai

It’s been a long and victorious road for Felipe Massa – one that was marked by more than one proposed retirement.  Who can forget last year’s Brazilian Formula 1 as Massa proceeded through the pits after crashing his Williams and ended up in something resembling an emotional breakdown at the mere magnitude of the moment.  He had one final F1 race remaining but as Brazil was his home, this would have been his final goodbye.

Not even three weeks later, Nico Rosberg stunned the F1 world by announcing his immediate retirement from Formula 1 racing.  The effect?  A sudden available vacancy at Mercedes.  One that would soon be filled by Massa’s teammate Valtteri Bottas.  With two experienced hands having left Williams in a short period of time, the team were now in dire need of a helping hand and partner for rookie Lance Stroll.

The rest, as they, say was history.

A Career To Be Proud Of

History, for Massa at least, will finally be writing the final sentence of a significant chapter in Dubai when this year’s Formula 1 season draws to a close as the Brazilian finally retires for good from Formula 1 racing.

Massa’s retirement brings about an interesting dynamic in that there will be no Brazilian drivers in next year’s Formula 1 season.  This is something that hasn’t happened since the 60’s.  Brazil has bestowed multiple F1 world champions on the sport: Emerson Fittipaldi, Nelson Piquet and of course, the legendary Ayrton Senna.  In many ways, Formula 1 belonged to Brazil.

Massa might not have made it all the way into the league of the F1 legends but the still has a lot to be proud of.  For a start (or should we say 269), only five drivers have competed in more Grand Prixs than Massa – Michael Schumacher, Rubens Barrichello, Jenson Button, and Alonso and Kimi Raikkonen.

And the truly grand bit: only one man has started more races for Ferrari than Felipe Massa.  Michael Schumacher.  A true study in how to keep good company.

Apart from his not too shabby 11 wins and 41 podium finishes in his career, what really warmed the world to Massa was that he was real.  This was never more poignant than at the time of his close brush with becoming the F1 world champion in 2008 when he came within a mere hundred meters of winning the world title.

It was his reaction to the heartbreak of the matter when Hamilton beat him by a mere technicality that truly defined the Massa that the world has come to love.