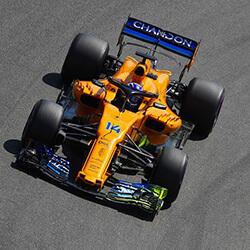 McLaren have recently unveiled their latest car, the MCL34, which is set to debut for the upcoming 2019 season. The team had the second slowest car for most of the 2018 season, but still managed to finish in sixth place for the championships thanks to the driving of Fernando Alonso.

The two-time winner has since retired from F1, and McLaren have a new line up of drivers, which consists of Carloz Sainz and Lando Norris. Zak Brown, McLaren team boss has said that they are currently in the rebuilding process, and that it’s going to be a journey. He added that last year they were over excited about how quickly they would return to the front, and now they’re looking at what went wrong and have made a lot of chances, so it will be an important year for them.

Sainz, who had previous driven from Renault, has stated that the team were resisting the temptation of setting performance goals before they get a handle of the new vehicle for the pre-season testing that’s set to take place in Spain soon. The car, dubbed the MCL34, comes with a number of innovative features, especially in the front of the sidepods beside the driver, as well as narrow rear bodywork that seemingly takes much inspiration from Red Bull.

Sporting director Gil De Ferran, who is a former Indycar champion and joined the team last year has said that the team is feeling excited and incredible at the moment.