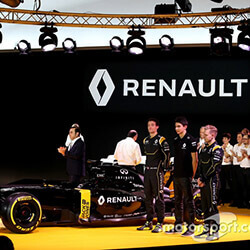 The F1 Renault racing team has announced that the MGU-K is ready to participate in the Austrian Grand Prix after a long delay. The part was originally meant to be part of the Grand Prix from last year, but was put on hiatus. Despite its current status, McLaren and Red Bull might not use it in this year’s event.

The MGU-K’s usage was postponed during the start of last year’s season thanks to some reliability issues, but has since been signed off for the upcoming event, and will be ready for the Red Bull Ring event.

As per the regulations for the Austrian Grand Prix, drivers are only allowed to make use of two MGU-Ks per season, and that penalties would be incurred if more than two were used.

McLaren and Red Bull are both reluctant to make the change just yet, however, as they want to see how it performs in a racing event. Cyril Abiteboul has told reporters that at least one of Renault’s customers has decide to make use of their improved MGU-K so far.

He went on to say that the part is available to any cars and teams that want to use it, and that that so far most teams have chosen not to. He added that it’s something that him and other teams have been waiting a long time to use, and that it’s now a problem that some of the teams have elected to not use it.