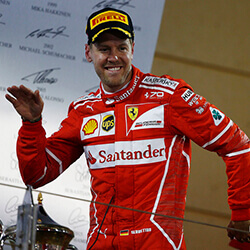 Sebastian Vettel managed to beat his opponents in a stunning end to the Bahrain Grand Prix, leaving other formidable contenders like Lewis Hamilton behind despite some mishaps with his tyres.

Hamilton himself only started in 9th place, and swapped podium places with Kimi Raikkonen after Raikkonen was forced to retire due to a collision with a mechanic during a pit stop. The mechanic was rushed to hospital, and many aren’t surprised that the incident occurred; it was a difficult track to navigate under the bright floodlights at the Sakkhir circuit.

Vettel chose to use less durable tyres on the track, and some believed that it wouldn’t be enough to outperform his opponents. He managed to outpace his opponents with half a second lead in front of Bottas, claiming his second win in his Grand Prix career.

Vettel was also fastest out of the starting block, and held on to the lead. Bottas, on the other hand, was able to snag second place from Raikkonen, with Hamilton’s unscheduled gearbox change forced him to leave the block at a later stage. His later start held him back, and he didn’t make any further ground as the race progressed, losing his position to Fernando Alonso.

Bottas held his close proximity to Vettel throughout the race, and attempted a lunge for first place on the opening bend of the last lap. Vettel held rank, and missed a tyre change to grab winning position.