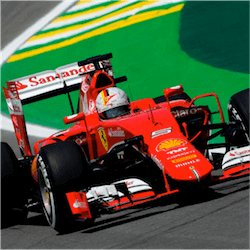 Sebastian Vettel has taken his first victory since July at the Brazilian Grand Prix, having controlled the race from the lead pole position.  It was a comfortable cruise to victory for Vettel and served to remind the F1 world what might have been for Ferrari had the team and the driver not made the errors that they did in September and October.

Never one to be left behind, Lewis Hamilton battled his way from the back into fourth place.  Hamilton started at the back of the grid after having crashed out during the qualifying rounds.  Within 20 laps, Hamilton had made it back into sixth place.  By the time lap 43 rolled around, he was back into fifth position.

The aim was obviously to be chasing a podium position and this is what Hamilton set out to do after having made his pit stop.  He used the grip and hold advantage of the super-soft tyres effectively in order to move in on the race leaders.  Speaking to the press, Hamilton said that in a way it had been fun starting at the back and that it reminded him of his karting days.

Despite the quick humour, Hamilton declared that he realised that he had messed up and that his intentions were to continue to do his team proud going forward.

Vettel At The Helm All The Way

For Sebastian Vettel it had been a case of being in control all the way.  The German returned to the track after his pit stop with Valtteri Bottas short on his heels.  Never getting much further ahead than two or three seconds, he was nevertheless able to maintain a comfortable lead throughout the race.

Vettel was notably relieved after the race, saying that initially he had experienced a wheel spin and thought that he had missed his chance, but that he soon noticed that Bottas seemed to be struggling even more.  He seized the chance to tightly move around the inside and said that it seemed as if this surprised Bottas.

After the initial wobble it was soon a matter of getting back to business and the remaining 68 laps were, as it were, history.  A notably relieved Vettel said afterwards that it had been a difficult couple of weeks leading up to Brazil and that it was nice to finally be back at the top.

The Formula 1 season draws to a close in two weeks’ time in Abu Dhabi.  Another close call between Mercedes, Ferrari and Red Bull is firmly on the cards.