Thunderous Duo To Go Head To Head In Belgium 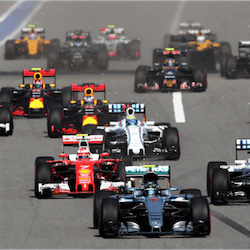 Belgium F1- It’s All In The Pairing

It’s the Schumachers vs. the Hakkinens, the Prosts vs. the Sennas, the Hunts vs. the Laudas – and now,  the Hamiltons vs. the Vettels – these are the fascinating duals that encompass the spirit of Formula 1 Grand Prix Racing, the companionship battles that make it personal.  Its Belgium on 27 August – and the dazzling duo are fast turning it into a two horse race.

However, the seemingly mutual respect for each other’s talents and admirable sportsmanship have not been present since day one, with Hamilton having refused to shake the hand of Vettel after the German deliberately rammed into the Brit with his Ferrari, a little less than a month ago.  It was no doubt salt in the wounds of Hamilton that Vettel managed to retain the title lead despite the 10-second penalty imposed on the German as a result of the prang.

Hamilton trails Vettel by 14 points ahead of Belgium.

Ferrari has closed all gaps on Mercedes in terms of speed and reliability – with Mercedes having been plagued by mechanical and reliability problems all season.  Vettel, however, isn’t bargaining on any fairytale endings – describing the 2017 season as having been a difficult and challenging one so far, and not bound to become any easier during the second half kicking off on August 27.

Hamilton has been quoted as saying that Mercedes has given up more points than Ferrari during the 2017 Formula 1 Grand Prix season.  This after having sacrificed three points as a result of an agreement with fellow team mate Valtteri Bottas – a bold move apparently supported by the powers that be at Mercedes.

Hamilton remained confident that Mercedes had the capability of winning the championship yet – and that it was simply a matter of the team taking full advantage of a well-deserved break and returning stronger and better than ever on August 27.

Meanwhile, despite the high-intensity cornering demands posed by the Spa-Francorchamps circuit, Red Bull and McLaren have opted for tyre manufacturer Pirelli’s ultra soft tyre range.  Pirelli believes that the ultra soft technology will make for a very exciting race.

Ferrari and Mercedes have had a notably more conservative approach, opting for a couple of sets of the ultra soft tyres, but mixing it up with typically firmer sets –super soft and soft.

This means that Max Verstappen will be stepping out onto the tarmac in the tyre manufacturer’s newest technology.