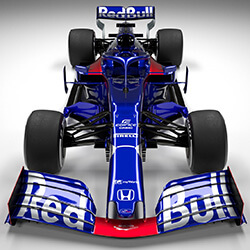 Red Bull’s junior team have been hard at working creating a new car for the upcoming 2019 season, and have taken full advantage of the F1’s new rules on car specifications, along with the newly appointed rule to allow teams to purchase parts from each other.

United States-based Haas was the first team to capitalise on this since 2016, and Toro Rosso see it as a way to make better use of their resources. The team also have a new line up of drives, that will include the return of Russian Daniiil Kvyat, as we well as British Thai Alexander Albon, who will be making his debut.

Boss of the team, Franz Tost, has said that he didn’t intent to set any targets for the Toro Rosso team, but Toyoharu Tanabe, technical director of Honda’s F1 team stated that Red Bull’s engines partner was hoping to achieve better results than they did in 2018, for both teams.

Toro Rosso finished in ninth place for the constructors’ championship for last year’s season, and achieved a best result of fourth place in the Bahrain Grand Prix with Pierre Gasly leading the team. Tost has also stated that the new Toro Rosso, which has been dubbed the STR14, will come with many parts purchased from Red Bull, specifically on the car the finished third while driving in the constructors’ championship, and that had taken four wins of its own throughout the 2018 season.