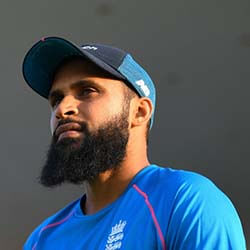 One more voice has emerged as part of the aftermath of the Azeem Rafiq racism scandal: that of World Cup-winning England spinner Adil Rashid.

Rashid is the latest player to have backed Rafiq’s allegations made against former England captain Michael Vaughan. According to Rafiq, Vaughan had during the lead-up to a 2009 T20 match told a group of Asian players how there were too many of “you lot”, something the former national skipper has vehemently denied.

Vaughan, now a prominent BBC pundit, has at least in part had his version of the events backed up by Ajmal Shahzad, who previously spoke of having had no recollection at all of the derogatory comment.

A statement issued by Rashid, which confirms Rafiq’s version of what had been said by Vaughan, represents the first real public show of support from a current player. Rashid expresses being encouraged by the fact that the situation has now progressed as far as a parliamentary committee, which committee he said seems to be attempting to bring about positive change.

Rashid said in his statement even though he had wanted to avoid being distracted by the saga involving Yorkshire Cricket club and Rafiq, he had felt the need to speak up.

The England and Wales Cricket Board has in the meantime suspended Yorkshire from hosting any further international cricket meets until such time it has demonstrated itself capable of meeting those standards expected of a global sports venue.