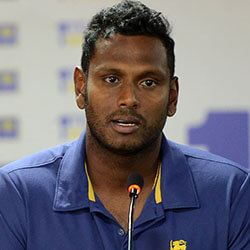 Former captain Angelo Mathews has reportedly been left out of the Sri Lanka one-day squad, but has also been named in the team for their upcoming Tests against England.

The 32-year-old all-rounder recently lost his position as ODI skipper after the Sri Lankan team left the Asia Cup. Dinesh Chanimal will be taking up the vacant role, and will be leading Sri Lanka in five ODIs against England, which will be followed by a Twenty20 international. It’s speculated that he was booted from the team due to his poor running between wickets, along with his propensity of running his partners out.

Left-arm spinner Malinda Pushpakumara and opener Kaushal Silva have also been recalled to join the Test squad. Pushpakumara is one of the five top spinners in the current 16-man group.

For the Sri Lanka Test Squad, the team is made up of: Dinesh Chanimal as captain, Dimuth Karunaratne, Kaushal Silva, Kusal Mendis, Angelo Mathews, Niroshan Dickwella, Roshen Silva, Dilruwan Perera, Dhananjaya de Silva, Rangana Herath, Malinda Pushpakumara, Suranga Lakmal, Akila Dananjaya, Kasun Rajitha, and Lakshan Sandakan. Lahiru Kumara is on the roster right now, but may be removed subject to his fitness tests that will be taking place before the start of the Test matches.