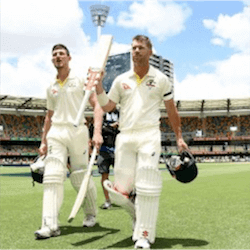 It’s almost easy to feel sad for the English.  Especially after their failed attempt at a come-back during the 2nd Test against Australia in the Ashes Series.  Australia did what they do best, won by 120 wickets and are now officially in a 2-0 lead ahead of the third Test that kicks off on December 14th.

It all went south with the untimely and premature fall of Chris Woakes to ball number 2 and subsequently Joe Root for 67 during the third over.  Josh Hazlewood was the man behind the demise.  The fall of Moeen Ali six overs later literally sealed England’s fate.  And not in a very good way at all.

England have now officially lost 7 Tests on Australian turf and will have to really step it up if they have any hopes of regaining any semblance of recovery.

On the flip side, all-rounder Mitchell Marsh has been added to the Australian squad for the upcoming 3rd Test of the Ashes Series.  Marsh will take the place of bowler Chadd Sayers, who had played in both of the first two Tests.

The batting-friendly surface in Perth has prompted the selection of Marsh, who is well able to provide valuable back-up for the likes of Josh Hazlewood, Mitchell Stark and Pat Cummins.  It was ultimately Marsh’s pace that gave him the edge over the likes of Glenn Maxwell.  Off-spinner Maxwell was responsible for the most runs in the JLT Sheffield Shield against NSW.  Yet, Marsh still made the cut, which is saying a lot.

Marsh will be joining his brother Shaun in the Test squad.  Mitchell Marsh last played for Australia during the India tour, after which he sustained a shoulder injury in Bengaluru.  He eventually had to undergo a complete shoulder reconstruction in order to correct the damage.

The reconstruction and recovery time that followed did not seem to deter the all-rounder at all and soon he was performing to the tune of a century in the JLT One Day Cup as well as making a cool 80 in the final against South Australia.  A score that went a long way towards securing the title.

Marsh went on to score yet another century in the Warriors’ JLT Sheffield match against Queensland.  Hard to believe this from a player who had recently undergone major reconstructive surgery.

As far as pace and tenacity goes it would seem that Marsh is indeed the man for the job.

The third Ashes Series test will fun from December 14th to December 18th.