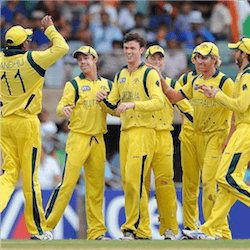 Hadley: Australia The Best Out There

They may not have gotten off to the most laudable start, but Australia’s Ryan Hadley is certain that his team is more than able to win the U19 Cricket World Cup trophy yet.  Sunday’s tournament opener did not go exactly as the Aussies would have planned, having been out-run by India by a cool 100 runs, but they did make somewhat of a come-back when they beat Zimbabwe in a seven-wicket victory on Wednesday.

Hadley is convinced that when his team plays well and gives it their all, they are nothing short of an unstoppable force and the best squad by far in the tournament. He also said that he thought that the victory over Zimbabwe would serve as enough of a confidence-boost to catapult the team back to glory.

Hadley sadly had to miss out on the tournament opener against India due to side injury that was sustained early in December while playing for New South Wales Metro.  He has since undergone extensive rehabilitative treatment and fitness training in order to be ready to re-join the squad for the World Cup tournament.  He expressed his relief at not having experienced any discomfort during the match against Zimbabwe and being able to generate good pace overall.

The Making Of A Quarter-Final Clash

Hadley made name last year when he was one of the key players instrumental in Australia’s series win against Sri-Lanka.  Hadley, Xavier Bartlett, Jason Ralston and Zak Evans are just some of the names to look out for in the current competition.  Together with a number of bowling all-rounders, the four star players are the building blocks of a possible quarter-final clash against England or Bangladesh.

Hadley however stressed that that the team did not want to take anything for granted, realising that they had to work for whatever they wanted out of the tournament.  He said that they realised that upsets were bound to happen but that they would be working hard to play as aggressively as possible, whilst making sure that the best performance possible is brought to the pitch.

Controversial Ruling Sees Pillay Given Out

Meanwhile, a controversial ruling saw South African player Jiveshan Pillay accused of obstructing the field after he tapped a resting ball with his bat, picked it up and passed it on to Windies wicket keeper and captain Emmanuel Stewart.  Stewart immediately approached two umpires, after which Pillay was given out for having obstructed the field.

Former Aussie star Lisa Sthalekar took to Twitter to express her distaste at what had happened, saying that the ball had been out of play at the time that it was handled by Pillay.