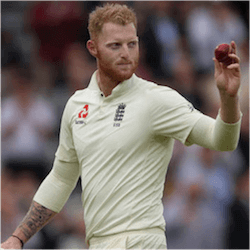 English cricket’s bad-boy and general all-rounder Ben Stokes, who remains unavailable for selection by England because of an ongoing investigation following criminal charges as a result of an incident outside of a Bristol nightclub, has reportedly entered into informal discussions with Canterbury cricket club about the possibility of playing domestic cricket in New Zealand.

Canterbury CEO Jeremy Curwin confirmed that informal talks had commenced with Stokes and that the CCA Board and New Zealand Cricket would be assessing the possibility in the near future.  He went on to say that nothing would be confirmed until such time as formal deliberations had taken place.

Stokes was the subject of much speculation on social media after being spotted moving through the corridors of Heathrow airport with his cricket gear in tow.   The ECB (England and Wales Cricket Board) however issued a statement shortly after, saying that Stokes was not on his way to play in the Ashes series or any other English training camp or setup, but instead was making a private trip to New Zealand in order to spend time with his family.

Meanwhile, Ben Stokes aside, England has not been having too fantastic a time of it in the Ashes series.  The Gabba saw them sitting squarely second as a result of a 10 wicket loss, let alone the emotional turmoil of being mocked at the very way their wicket keeper says “hello”.

In all fairness, England did depart for Australia at a mental loss even before the series began.  A largely unproven top 5 coupled with a recent lack of genuine bowling pace being two of the main culprits.

Then to add insult to injury, they were headed for the Gabba, a location where Australia have not lost a test match since 1988.  And yet, when England got stuck in there, they got stuck in there for three and a half days of playing their hearts out.  A lot of evidence suggested that England could match up to Australia in every way, and the key give-aways were exactly that: give-aways.

All things considered, most importantly perhaps the gaping hole in the top 5 (3 Ashes newbie’s with only 15 test matches in total between them) the Gabba didn’t turn out to be the disaster that everyone, including England’s fan-base, expected.

The only real problem was that no one managed to make a 100.  After all, petty scores don’t win matches.

Especially not at the Gabba.