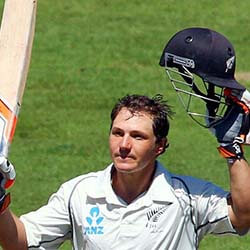 Extended periods of time spent away from his young family, more than anything, was what had eventually led Black Caps legend BJ Watling to call time on his cricketing career with New Zealand.

Watling, 35, announced this week that he’ll be calling time on his career once the Black Caps return from their upcoming tour against England in June.

Watling will be taking his leave as a true New Zealand Test phenomenon, while holding the Test record for wicketkeeping dismissals and catches in national Kiwi cricket, currently at 257 and 249, respectively.

Since making his Test debut for New Zealand as opener against Pakistan in 2009, the cricketing legend has played 73 Tests – with 65 of those Tests spent behind the stumps.

Weighing heavily on the Test great’s mind was the long periods of time spent away from wife Jess and the couple’s two young children. Watling said he always knew this was going to become a challenge somewhere down the line, and following the birth of the couple’s second child, that time has apparently now come.

Part of the challenge, said the playmaker on Wednesday, is a matter of divided focus. Now that he has a growing young family requiring his time and attention, Watling said he’s no longer able to focus quite as much of his attention as what he would like to, on playing sport.

Watling also added that despite having been troubled with all sorts of injuries over the course of his stellar career, his body had not played a role in the decision to step away from the game.