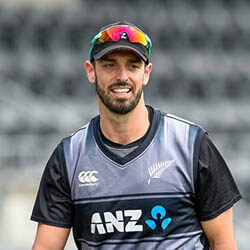 Black Caps star all-rounder Daryl Mitchell has been fined 15% of his match fee for the use of inappropriate language during New Zealand’s first Test victory over the West Indies.

Mitchell allegedly swore during the 62nd over while the visiting West Indies side was batting. He did this while in close proximity to Windies skipper and fast bowler Jason Holder, who had at the time been running between the wickets. Mitchell was found guilty of the offence as described in Article 2.3 of the International Cricket Council’s Code of Conduct. Article 2.3 prohibits the use of audible obscenities during international matches. The charge against Mitchell was brought by TV umpire Christopher Brown, and on-field umpires Wayne Knights and Chris Gaffaney.

Mitchell has in the meantime responded to the charge by pleading guilty to the offence and accepting the sanction imposed on his match earnings. In addition to the fine, Mitchell has also had a demerit point recorded on his ICC disciplinary record. Owing to Mitchell’s plea of guilty, he will not be made subject to attending a formal hearing.

Breaches such as that committed by Mitchell – categorised Level 1 breaches – provide for a minimal penalty in the form of a public reprimand, and a maximum imposable penalty equal to 50% of the guilty party’s match fee, and two demerit points.

West Indies captain Jason Holder has in the meantime called on his side to stop talking and start playing and performing. His side lost the first Test against the Black Caps by a devastating 134 runs.