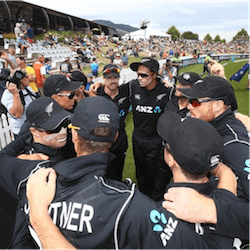 The Black Caps lead the way: fitness-wise, speed-wise and when it comes to strong-arming any other New Zealand national team. This according to proud Black Caps coach Mike Hesson. Hesson believes that it’s only a matter of time before his squad conquers world cricket as we know it. Best of all, he’s completely serious.

It’s mostly thanks to Chris Donaldson, who happens to be a former Olympic Sprinter. Donaldson has been conditioning the national New Zealand cricket team for the past seven years, turning the squad into a fitness-driven machine.

If you’re a Black Cap, there’s no escaping the firm hand of Donaldson, who expects those under his tutelage to show up and shine. Nothing less will do. Donaldson certainly seems to have the winning recipe completely under control. He ranks his players in terms of speed, strength, fitness, composition and power. Ranking lists are a matter of public information in the eyes of Donaldson and are routinely circulated to everyone. Something that no doubt serves to spur on those populating the bottom of the list.

According to Donaldsan, the fast bowlers are generally at the top of the list. This is necessary, as they have to be in a position to generate a great deal of force. They are required to deal with high impact situations, and if they were to lack in strength and fitness, they would not be able to cope with the demands of the sport.

Donaldsan can obviously not stress the importance of proper conditioning enough, saying that New Zealand does not have the luxury of a large selection base from which to draw new talent. It basically comes down to making the best of what you have. It comes down to conditioning.

Whilst they do not hide the fact that players are pushed hard and fast, Hesson and Donaldson agree that players must be rested regularly. Off-season breaks tend to be more regular and longer than those enjoyed by players of other sports in the country.

Trent Boult and Tim Southee are two prime examples of the benefits of regular rest. Boult, for example, returned better and stronger than ever when New Zealand went up against India during October. The fast bowler had hardly bowled for a couple of months leading up to the competition, and had undergone minimal fitness training.

Hesson does not mince words, saying that his players aren’t robots, and that guys like Trent and Tim have to be looked after.