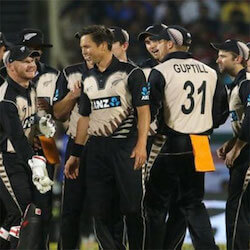 England may have won, but New Zealand is still through to the final against Australia. A feat described by Black Caps opener Colin Munro, as being bittersweet. A 12 run-stint was what was required of the final over, but sadly, the Mark Chapman / Colin de Grandhomme partnership only stood firm for 9.

England, on the other hand, had gone above and beyond, with returning captain Eoin Morgan smashing it out at 80 runs from 46 balls. Morgan ultimately helped guide England to a respectable 7-194 final tally.

English Bowlers Go All Out During Final Overs

A visibly disappointed Munro said afterwards that he was happy that New Zealand had made it through to the finals but that it still irked him that it hadn’t been a win, after all. He himself had whipped up his own half-century by striking up 57 from 21 balls and seven sixes.

Munro said that his disappointment stemmed from the fact that every time a player put on the Fern, it became important to play but also to win. He also said that it was necessary to give credit where it was due and that England had played really well, having bowled brilliantly, especially during the last couple of overs.

Munro And Chapman Make For A Good Start

The New Zealand team have their openers to thank for making the finals, with Munro striking it out powerfully from the very first ball. Young player Mark Chapman too, did not disappoint, hitting up a not to be smirked at 37 runs.

England may have missed out on the final, but will no doubt be looking forward to the five-match One Day International series in Hamilton, against New Zealand, with new vigour after the victory.

Ben Stokes Still Not In Play

Meanwhile, the absence of returning English all-rounder Ben Stokes was a notable one. It was decided well ahead of the match that he would not be joining in, having just flown in to join his team mates and being a higher-than-usual risk for injury.

The challenge is now for Stokes to get match-fit again, after having been away from official English matches since last year. Stokes did join in with the pre-match fielding drills, but was obviously taking it very slow.