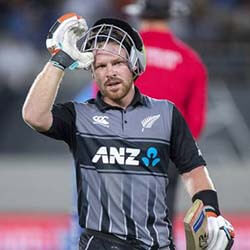 While there isn’t yet any specific timetable in place for Black Caps player Tim Seifert’s return back home from India, coach Gary Stead has voiced his backing of the player to make it through a precarious and harrowing time.

Seifert remains stranded in India after returning two failed PCR tests shortly before the departure of the two chartered flights headed back to New Zealand with Kiwi IPL players. Seifert was a playing member of the Kolkata Knight Riders before disaster struck and the competition got postponed indefinitely.

While Stead this week admitted to not having spoken physically to Seifert since the incident and stay-behind, he did confirm that several text messages had been exchanged between himself and the Kiwi white-ball stalwart. Stead also added that Siefert’s mental state of being had improved considerably since the unexpected suspension of the event.

Currently in managed isolation, the Kiwi will be unable to train until such time as he’s managed to make his way back to New Zealand.

Stead also said this week that the situation in India had changed suddenly and rapidly – and in as little as a space of two or three days. The option to stay or return home was apparently presented to all players from New Zealand, including Trent Boult, who opted to return to England early because of the effects of the dramatic situation on his state of mind and mental health.

The Black Caps coach added that there’s no doubt in his mind that Boult will be good and ready to resume his game in England in no time at all.