Playing Ball No Longer A Given 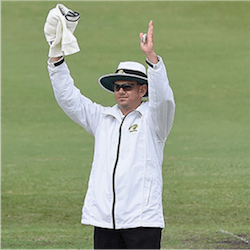 Many will no doubt end up rueing the day, but it’s official:  players can now be sent off for the very first time in cricket.  The means to this particular end: a red card.  The new penalty (some would say punishment) system will initially be implemented in the upcoming Test matches in the United Arab Emirates and South Africa.

More changes than just severe punishment for bad behaviour are afoot, with the new rules governing umpire referrals as well as the new bat size specifications coming into force on Thursday when South Africa play Bangladesh on SA’s home turf and Sri Lanka go up against Pakistan in Abu Dhabi.

The new DRS System (Decision Review System) involves a TV umpire reviewing the decisions made by the umpires on the field.  The system was successfully tried and implemented during Test and One Day matches and will now apply to T20 Internationals too, going forward.

The revised rules now make provision for a player to be sent off as a result of gross misconduct or general bad behaviour.  This includes threatening to assault an umpire – a dirty deed that has been on the increase, making deliberate physical contact with an umpire (of the inappropriate kind, of course), assaulting any other player or person or any general display of violent behaviour.

Fast bowlers may end up bearing the bulk of the brunt under the new regulations.  After all, just how much fun is cricket going to be without a little bit of red balling and sharp words to go with a cocktail of aggression and intimidation?

The good news is that in order to receive the fearfully anticipated red card expected to strip cricket of all elements of character and fun, one would have to really have sinned.  At least a level four offence under the new code of conduct will have to have been committed.  Anything short of actual physical or extreme verbal violence against players or umpires shouldn’t result in an actual banishment from the field.  That should be enough leeway for the spicy banter and competitive aggression to be able to continue undisturbed.

When considering the nasty bit of kit already carried around on the field by umpires, the addition of the new bat thickness gauge to the already unsavoury mix might just end up being exactly that which warrants the red card of doom.

Because nobody likes a know-it-all.