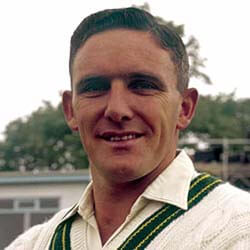 Alan Davidson, a man widely regarded as one of the greatest left-arm bowlers of all time, has died. He was 92.

Davidson was a master of economy. Aside from every other incredible achievement, of which there were many, he throughout the course of his illustrious career bowled off no more than 15 paces and yet from that, managed to produce even pace-balls at will.

But more than just a bowler, for which position he was best known, he also happened to be a premium middle-order batsman. This led many to believe him to be an all-rounder capable of doing just about anything on the pitch with the bat as well as the ball.

Born in Lisarow in New South Wales, though a below average-sized youngster in his youth, he quickly emerged a natural sportsman. Before eventually being picked up by New South Wales, he used to play grade cricket for Northern District.

More proof of the incredible star he really was, was that he got picked for Australia’s reserve team for a tour of New Zealand after only three Sheffield Shield matches. He was 20 years of age at the time, and during that particular trip in a match against Wairarapa, would take not only 10 wickets in an innings, but also follow up the stunning feat with a century.

Davidson played a total of 44 Tests during his stellar career.

He is survived by wife Betty McKinley and sons Ian and Neil.