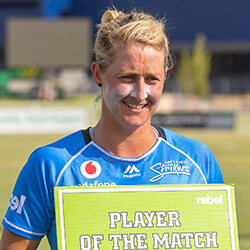 New Zealand captain Sophie Devine says her helping New Zealand to set up a four-wicket win over England at the Hove on the weekend is a reflection of her own mental return to the winners’ circle. Devine on Saturday celebrated her 100th T20 international with a half-century that included a stunning four sixes.

But despite her mighty comeback, the NZ skipper spoke after her stunning performance of how necessary it had been to step away for a two-month mental break. The battle for getting back into a healthy and sound headspace had been hard, but now that she’s back, Devine said it feels “just like home”.

After a number of losing stints, Saturday’s win at the Hove is bound to give the group the confidence they so desperately need to make their game count going forward.

But it wasn’t easy going all the way for New Zealand, either. Before seamer Hannah Rowe managed to remove both Maia Bouchier and partner Danni Wyatt in the 16th over, Bouchier made her own game count with a stunning 25 runs off 24 balls – the highest score secured by an England player during a debut performance since the very first T20 international back in 2004.

Rowe however removed both partners at an attempt at the cut – with Wyatt out after a catch at short third and Bouchier caught off-guard behind the stumps. From that point on out, England for the most part became the authors of their own demise with only a single boundary hit and only 20 runs added during the four final overs.